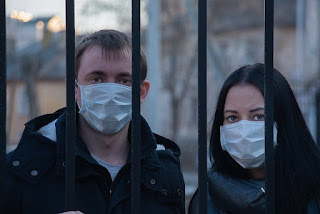 In today’s Gospel, Jesus quotes two popular events from the Old Testament, the flood of Noah's day (Gen. 6:7), and the destruction of Sodom and Gomorrah (Gen. 6:19). Jesus used these two events to make them possible as important comparisons for the coming of the Son of man. "So it shall be in the day, where the son of man shall make himself known" (Lk. 17:30). Here, Jesus made it clear that when the son of man express himself later, in a situation where humans are living a normal life, human activities go on as usual. There's no insulation nor lockdown like it is happening right now. People go about their lives; Eating, drinking, buying and selling, planting and building, even mating and mating), continued to be normal, with no special treatment at the time leading up to the coming of the son of man.

Yet, it is here that human concerns are often not ready for the coming of Jesus because there is no early warning. As in the days of Noah and Lot, most people made fun of both Noah and Lot, who were busy building an ark and invited children and families out of Sodom. They're even considered insane and paranoid. In our society today, people who are trying to obey a health protocol because of the Covid19 pandemic and often considered funny, ridiculous. Many are fall not in sore straits, but in normal life. Thus, Jesus came at the time when life is walking normally, perhaps, even when we do not “expect” him to come just for now, when life's normality "lulled "men into ruin, as did many around Noah and a Lot of old. We know, that the Son of man will come suddenly, unannounced, without warning. However, we have been warned to prepare ourselves, to be watchful, and not to be lulled into a false spiritual or drought of spiritual life. Are we among those brought (to salvation) or left behind in destruction?