In Cruce Domini | Boast In The Cross

“May I never boast except in the cross of our Lord Jesus Christ, through which the world has been crucified to me, and I to the world.” - Galatians 6:14 (NIV) 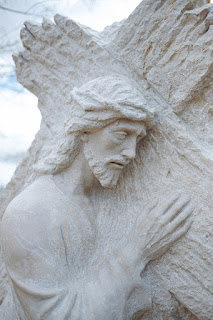 Photo by Wesley Tingey on Unsplash

Prioritizing outward symbols makes our spiritual life appear godly on the outside, but porous on the inside. Porous faith makes it easy for people to deny God, just as easily as they hide the necklace of the cross from the eyes of others. Therefore, a life that bears the fruit of goodness as a form of faith is more meaningful than just an outward sign. What kind of faith are we living?

However, not a few people emphasize the excessive use of symbols. The Jewish Christians forced the Galatians to be circumcised, as if salvation in Christ was not complete. They considered the increase in circumcision as an achievement in itself. Circumcision is also used to avoid persecution. They chose to adhere to erroneous doctrines rather than be persecuted for following Christ.

Paul had some outward signs: circumcised on the eighth day, from the nation of Israel, from the tribe of Benjamin, a native Hebrew, a Pharisee, blameless in keeping the Torah (cf. Phil 3:5-6). However, he did not boast about any of it. He gloated in the knowledge of Christ and chose to suffer for serving.

Boasting in the cross includes admiring God that through this way He can redeem us, justify us, bear the curse of sin in our place, and release the power of the Holy Spirit into our lives. Boasting in the cross involves our whole heart because there is indescribable love inside. Of course, just like money, some degree of respect is required: it is difficult to do much if we are hated by everyone. Paul himself wanted to be respected by the church in Galatia, so that his gospel would also be appreciated. However, if he ever showed his status as a Roman citizen, for example, it was not because of his status but to strengthen the position of the church there.

Christianity recognizes many outward symbols. Cross-shaped jewelry; wall decoration with verse quotes; Christmas ornaments. The church administers the sacrament of Baptism and Holy Communion, using candles, palm fronds, and so on. All of that can support us in interpreting Christ's work of redemption.

Boasting is actually the same as praising ourselves. According to Paul, a believer who has received a lot of God's goodness and mercy but then still praises himself or boasts, makes a mistake. It is arrogance! That means we should not boast. But if we want to boast, boast in and through the name of Jesus.

Success or progress achieved in this life often makes us proud and boastful. This is something natural and human. But Paul reminds us that all that we experience because of God. All because of His power, love and goodness for all of us.