In Eodem Sensu | Be United

"I appeal to you, brothers and sisters, in the name of our Lord Jesus Christ, that all of you agree with one another in what you say and that there be no divisions among you, but that you be perfectly united in mind and thought." - 1 Cor 1:10 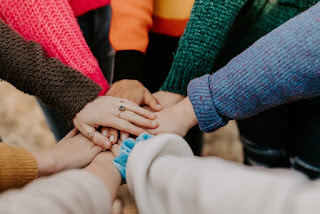 Why was it necessary for Apostle Paul to remind the Corinthians about the importance of unity? Since division had developed among his followers, the relationship between the members of Christ’s body was no longer compatible. They formed some classes: the Apollos', the Cephas' and the Christ's. The question is, did each class have a different Christ? Of course not, that was they themselves who had formed forts between them. So Apostle Paul asked, “Is Christ divided?” (1 Corinthians 1:13).
Today there are many Christians who unwittingly have attached-hearts to the Lord’s servant rather than to the Word spoken. They began to decide and idolize priests or preachers - no longer Christ. They would rather flatter or worship a man who is seen through the invisible God. They would not want to come to their prayers if they knew that their sermons had less appealing and unpopular preachers. This is what eventually became a division among the congregation in one church. They forget that as powerful as the servants of God may be, they are merely tools, where the spirit of God works.
Then, in Verse 17 Paul explains one thing that is more important than simply increasing the number of church members or the number of followers by saying, “For Christ did not send me to baptize, but to preach the gospel; and even then not with the wisdom of speech, lest the cross of Christ be made void.” Paul’s main task was to preach the gospel, and he did not preach the gospel by his own wisdom, ability or intelligence, but with the wisdom of God. Paul said that he preached the gospel with the wisdom of God and not with the wisdom of men, so that people would not depend on him but depend on God.
Paul said this so that the church would not rely on Paul but on God, so that the preaching of the gospel would not be in vain. If the preaching of the gospel that we do makes people depend on us, then the preaching of the gospel is in vain. We preach the gospel, so that everyone who hears the gospel, depends on God.
Reflection on 1 Cor 1: 10-17 by Paulus Renggo
(Listen to the Podcast here)
Posted by Deliana at 12:07 AM