“When you were dead in your sins and in the uncircumcision of your flesh, God made you alive with Christ…” – Colossians 2: 13 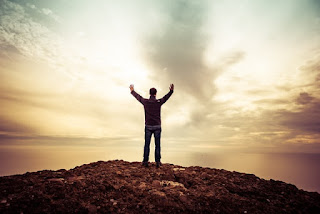 Having been raised in a Buddhist/Taoist family, I used to have a deep dread of death and beyond. I remember walking through the 7th month festivities and seeing all the gory torture scenes of people who were being punished in Hell for their various sins in life. I always trembled in fear when I looked at those graphic banners, and feared for my own punishments for the wrongs I’ve done.

Later in my young adult life, I thought I found the answer in Buddhist philosophy, and sought peace by reading dharma books in Buddhist temples as I was recovering from an acute right-brain stroke at the age of 33. The stroke rendered me half-paralysed in my left torso and my heart was in a turmoil over my perceived bleak future. Although, I felt peaceful in the temple, the feeling of peace fled my heart just as quickly the moment I stepped out of the temple.

I struggled with this tempest in me for many months until one morning. I was doing my regular morning exercise in the small garden within the HDB estate where I lived, as I was walking alone, my mobile phone rang with a familiar contact number. She was a uni friend and we had lost contact for a good 10 years since we graduated and pursued our own separate lives and career.

Over the phone call, she was shocked to find out that I had suffered a serious stroke at such a young age and that my marriage was on the rocks. She quickly asked to meet me in the garden and lead me to say the sinner’s prayer and I dedicated my life to Jesus in Dec 2005, 2 months after my stroke. Through our conversation, I also found out that she did not live in my estate but was staying over the weekend with her sister who lived there. Just as she was drinking her coffee and staring out the window, she noticed a familiar figure, i.e. me, walking in the garden. The Holy Spirit prompted her to call me and she tried to resist but the Holy Spirit’s prompting was really relentless to the point that she knew God had a mission for her that day.

Through the saving grace of God, I stopped having recurring nightmares of me and parents dying without any purpose nor assurance of where our souls would go after death. I also got to know after my father’s death in 2003, that he had also received the gift of salvation, just 2 weeks prior to his death from cancer.

I know that we are separated right now in life but one day, we shall be reunited in Heaven with our new bodies. God’s Grace is more than enough for me in this life and the life after. Amen.